Amirah O’Neal, the daughter of LSU and NBA legend Shaquille O’Neal, has joined her father’s alma mater, according to a tweet from her brother, Shareef O’Neal.

LSU athletics announced Wednesday that Amirah’s brother, Shareef, was officially transferring from UCLA to play basketball for the university.

The next day, Shareef announced that his sister would be joining him, posting a photo to his Twitter.

“THE BROTHER SISTER DUO! Congrats to my sister on committing to LSU,” Shareef wrote. 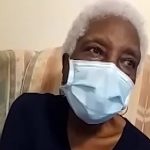