Four Minneapolis police officers were fired Tuesday following the death of George Floyd, a Black man who died on Monday after an officer kneeled on his neck while he was handcuffed on the ground, shouting that he couldn’t breathe.

Police Chief Medaria Arradondo announced their terminations during a news conference. He did not publicly identify the officers.

“It is the right decision for our city,” Mayor Jacob Frey said of the firings. “We’ve stated our values and ultimately we need to live by them.”

Bystander video that circulated on social media shows an officer who appears to be white pressing his knee into Floyd’s neck, while Floyd is pinned face-down on the street. Floyd can be heard repeatedly pleading with the officer to get up.

Within minutes, the video shows Floyd closing his eyes and no longer speaking. The officer appears to keep his knee on Floyd’s neck, even as onlookers begin shouting that he isn’t moving and demand that officers help him. The video shows a second officer nearby, looking in the direction of onlookers. 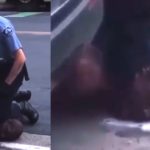 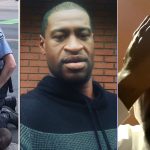