#BrendaERobinson is the first African American female pilot in US Navy history. She has been inducted into the International Pioneer Hall of Fame. The 59th woman to enter the Navy’s training program, she became the 42nd to earn her wings, and the first black woman to earn Wings of Gold. Brenda E. Robinson

Brenda E. Robinson was born in 1956, in North Wales, Pennsylvania. She was the only daughter of Susan and Edward Robinson. She’s always had a passion to fly. Brenda earned her private pilot certificate at MacArthur Airport in Islip, New York. While a senior at Dowling, a military services meeting paved Brenda’s path to a military flight deck.

She received her wings of gold on June 6,1980, at Naval Air Station Corpus Christi. In 1992, Brenda transitioned to the Naval Reserves and was hired by American Airlines. She was among the first African American female pilots at American and flew with them for 17 years aboard Boeing 727, 757, and 767 aircraft.

Today, Brenda shares her success stories in a number of ways. She published Success is an Attitude: Goal Achievement for a Lifetime in 1995. She is a sought-after speaker at schools, and launched the Aviation Camps of the Carolinas in late 2014. She is currently working on her next book, The Very First Raven, detailing her life as a pioneering aviatrix. 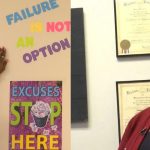