A recent Twitter post features an excruciating 17 seconds of local news coverage at a Trump rally in Toledo, Ohio as a Trump supporter is asked to name something the 45th President has “done well.”

The rally was in friendly territory for Trump. In the 2016 election Trump took Ohio with nearly 52% of the vote, trouncing Clinton’s 43%.

One reporter at the event asks a simple question of one supporter:

“What is something that you believe the President has done well?” 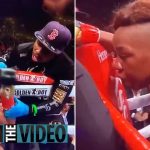