A quintessence of forward-thinking leadership, Lorron James says that his most valuable customers are his employees at James Group International (JGI). Thanks to its annual revenue of $138 million in 2018, JGI was listed 30th on BLACK ENTERPRISE’s top 100 black-owned businesses.

Lorron strongly believes in equipping his team with the resources they need to bring out their best. “My philosophy as a servant leader isn’t to hire smart people just so I can tell them what to do,” Lorron says. “They are the subject matter experts and I work for them.”

In 2018, thirty-six-year-old James became CEO of JGI, a holding company based out of Detroit. JGI was founded by John A. James, who handed over leadership to Lorron and 38 year-old Army veteran John E. James. John E. James is president of the firm and ran an unsuccessful bid for the U.S senate in 2018.

While JGI’s leadership has changed, the firm’s strong growth continues. In 2017, the firm recorded a revenue growth of $119 million, and climbed 16% to $138 million in 2018, a rise Lorron and John believe is fuelled by the company’s talented staff who have “mastered the ability to utilize the technology and resources they have to not only garner new business but maintain and build on the current contracts we have.”

Moving ahead, Lorron discloses the company’s growth plans, which includes diversifying its revenue sources by leasing its industrial real estate space in Detroit to businesses. JGI also launched a material-tracking software for customers in 2018, and is hoping to increase gains from sales as the software gains popularity. 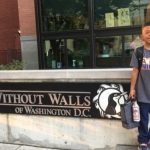