A Detroit woman, who has been racially abused for having a dark skin most part of her life, has become the face of a new shade of foundation that impeccably matches her skin tone.

Joy Mohammed, a mother of five who has been bullied all her life for being ‘too dark’, has finally found confidence after becoming a model for new make-up shade 6.04 Warm Red Ebony, sold by Detroit-based brand The Lip Bar.

It is owned by black female entrepreneurs.

Surprisingly, the racial abuse she suffered came from persons in her black community.

‘They would ask me ‘oh is that your mum because she isn’t as dark?’ This all came from black people in my community,” she narrated.

From her childhood days as a kid in class, Mohammed struggled with bullying that left her feeling ‘ghastly’ during dance recitals or class photos.

“I was always the darkest kid in class when I was younger – it was rough. People would make comments about my skin color and call me things like “blackety black.

“I looked horrible, just ghastly. I’d have a dance recital and all the girls would get their make-up done, but I remember going to the local convenience store because that’s all I could afford,” she told Daily Mail.

For many years, she’s had to wear make-up that was too light for her skin until last week when the law student found herself tearful in front of the cameras and modeling the new make-up shade 6.04 Warm Red Ebony.

Unable to contain her joy, Joy said: “I was completely overwhelmed to be asked – absolutely blown away. I couldn’t get over the fact I was tapped to represent a foundation shade that was unavailable when I was in need of make-up for senior photos and dance recitals, because my skin tone was so ‘undesirable’ to the masses”.

Until she came across The Lip Bar that was created with black women in mind, Mohammed was badly affected by the insensitive comments she’s endured since being a kid right up to her adulthood.

The only thing which made the teasing and the midnight jokes worse was the fact that when it was time for some make up I had no options. The shadows lacked pigment. The foundations never inclusive. The world was against me. Then Dave Chappelle came out with the “Dahkness!!!” Rick James skit. It was a wrap for my self esteem. I wanted to be as invisible as I clearly was. And then came the @thelipbar. Where I’m included AND seen. It’s good to be recognized. Mom of 5. Law student. And model. You wish you was this dahk. You could neva. 📸: @breannwhlgn

After receiving an invitation to the make-up studio by The Lip Bar product developer Kori Fields, she said: “I was drawn to this brand not only because it was also Detroit-owned, black-owned, and women-owned, but because it worked so well and showed up on my skin so well.”

“The kind of low-priced makeup you get in supermarkets doesn’t show up on me,” she noted, adding that for the first time, she was really able to let go: “To have the same thing that people were so mean to me about for years, and then be told “it’s okay.”

“The product color is seamless, it goes on and you can’t tell when the product ends and where my skin begins.” 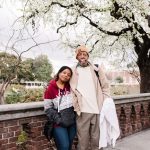 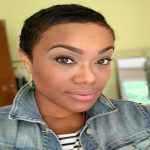