A North Carolina grandmother’s typical daily walk turned into a 5-day missing-persons search after her frightening disappearance last week—and thanks to her grandson and his friends who decided to search “one last time,” tragedy was averted.

Sandra Adams’ family went to spend time with their grandmother on a Friday morning, only to discover her missing. They had last seen her two days before but were worried, so they reported her disappearance to the police.

The Charlotte police department and family members searched for days but had no luck finding the 69-year old woman, so the team gave up their search.

ate Cassel, Sandra’s grandson, and his friend decided to give one last search effort. They figured that she had to be somewhere around her apartment building.

On the morning of Monday, July 8th, Cassel, Shawn Willis, and two other friends set out into the woods behind his grandmother’s building. “He wanted to go look in the woods—I woke up this morning with the same idea: Let’s go search the woods in the neighborhood,” Willis told WSOC-TV.

after hiking about a quarter-mile through the woods behind her apartment, Cassel and his friends discovered his grandmother lying facedown in a creek. He feared the worst and called the police and his family to share the news. As he approached her though, she raised her arm; she was alive.

She later told officers that she had fallen while going for a walk.

Thanks to her grandson’s love and dedication, Sandra Adams will make a full recovery and live to enjoy more walks through the park.

(WATCH the WSOC interviews below…) 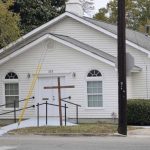 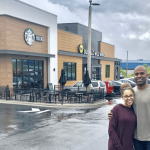