A Toronto police officer has been found guilty in the horrifying beating of a young Black man in 2016, while his brother has been acquitted of all charges for the same crime.

The police officer, Michael Theriault was convicted of assault on Friday, with many thinking he should have been charged for aggravated assault and obstruction of justice in the incident involving Dafonte Miller, which had left him with a blind eye.

According to CBC, the officer’s brother, Christian Theriault, was acquitted of aggravated assault and obstruction of justice. Court documents also stated that both parties presented vastly different versions of what happened before the assault.

He added that “his task was not to conduct a public inquiry on race and policing, or to deliver the decision sought by the public – it was to determine the case based on the evidence.”

Miller said during his testimony that he was walking down a street early in the morning with two friends when the two off-duty officers approached and demanded to know why he was there.

According to court reports, the officers chased him, eventually catching up with him and attacking him with a pipe.

An eyewitness, James Silverthorn told the court that he heard Miller screaming and looked out his window to see the two men violently beating the teenager.

“It was continuous. It was very hard,” Silverthorn said during his testimony, adding that one of the men was using an object to hit Miller as he writhed on the ground.

In a news conference after the ruling, Mr. Miller said he did not feel the outcome was a loss, CBC reported.

“A lot of my brothers and sisters are going through similar situations as me and a lot of my people are dying and a lot of officers are walking. So I don’t feel like I took a loss – I feel like we took a step forward,” he said. 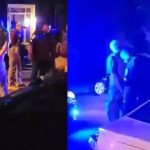