On Saturday, GAFollowers.com shared an image which they claim is of Gregory McMichael at a KKK rally in Georgia back in 2016.

McMichael and his son Travis were arrested this week and charged with murder after a video emerged of them chasing down Ahmaud Arbery and shooting him to death.

According to the website, the older McMichael was captured in an image at a white supremacists rally in Rome, Georgia.

You can see the images below: 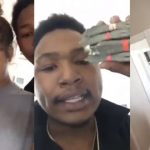