A 68-year-old mother from Missouri is suing police after she claims she and her son were “violently arrested” while trying to return a TV they’ve purchased at Sam’s Club.

A Black woman by the name of Marvia Gray, alleges police brutality at the hands of the four white officers it took to restrain them, after they were falsely accused of stealing.

Cell phone video captured the moment the duo were arrested, which left her 42-year-old son with shattered front teeth, a head injury requiring 12 stitches and seven staples, as well as a cut above his right eye that required seven stitches; she claimed afterward that during the confrontation, she thought her son was going to be killed.

The incident happened on March 23rd when Derek, her son purchased a 65-inch Sony Bravia while shopping at the Manchester Road store, but they couldn’t fit the TV into his Lexus SUV, so employees were going to leave it on a pallet where he could come back later to get it.

But when he came back to return it later that day with his receipt, the TV was not at the front of the store where he arranged.

The lawsuit claims that when he asked an employee about it, they suspected him of trying to steal it.
Eventually, he was given the TV when an employee intervened and told management Gray had paid for it.

But as he left the store, one of the police officers, Michael Clayborne, followed him to his vehicle — even after being told by the store employee he had paid for the TV, according to the suit.

“Despite knowing this information, Officer Clayborne made an emergency phone call to the Des Peres Police Department,” the lawsuit states. “During this emergency call, Officer Clayborne falsely reported that he had ‘witnessed Gray steal a TV and place it in the parked vehicle.”

Video of the incident show the pair screaming in distress as shoppers look on, while blood flows from Derek’s bruised face.

After seeing “a couple of posts on social media” relating to the incident, Des Moines Police released an “overview” statement of what had happened.

It claimed one of its officers “believed he witnessed a possible theft in progress”, but after speaking to the subjects involved as well as store management, “a theft could not be determined.”

Less than an hour later, it dispatched officers to the store for a reported larceny in progress; when they arrived they said they were notified it was the same subjects from the earlier incident “and that the items were in fact stolen.”

They said they attempted to detain him but he “did not comply and began to struggle with the officers.”

They claimed that during the struggle they both crashed into a wall, and that the subject attempted to use a fire extinguisher against the officer.

“A family member who began to grab and pull at the officers during the initial contact was also taken into custody and charged with interfering and resisting arrest,” it said.

Marvia Gray is suing the city, as well as the four officers.
“They going to kill him,” she recalled during a news conference on Monday, according to the St Louis Post-Dispatch. “I gave up. This is the way Derek is going to go. They were beating him so bad.”

“I have no faith in the police anymore,” she added. “They tried to take my only child.”
Her lawyer, Andrew Stroth, defended her actions during the arrest.

“Mrs Gray thought her son was about to be yet another black man, unjustifiably shot and killed by the police,” he said. “Whether it’s Michael Brown in Ferguson, Missouri, or Ahmaud Arbery in Brunswick, Georgia, we demand justice and accountability to prevent these tragic events from happening in our communities.”
There are no state charges filed against Derek Gray. 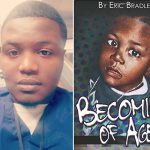 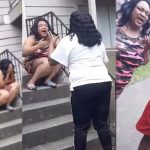