Charlotte rapper DaBaby revealed he was sexually active in his early childhood on the Lip Service podcast.

The hosts played a game with DaBaby and share their experiences about losing their virginity. Maguire, a host on the Lip Service podcast said her first sexual encounter was at the age of 11 while dry humping another girl until they both climaxed.

They disagreed that dry humping should be considered losing one’s virginity. DaBaby had a similar experience.

“If that’s losing your virginity, then I lost my virginity at four-five years old,” he said.

DaBaby seem hesitant to share the details of the sexual encounter but went on to share what happened.

“I got two older brothers. So all the older n****as from the neighborhood, they used to come to the crib. My momma worked two jobs. She would get off her job and go to her other job. She wouldn’t even be home. Me and my brothers would come straight home from school. We little ass boys,” Kirk said.

DaBaby, who was 5 years old at the time, said he would imitate his two older brothers who would sexually engage with older girls who stopped by the house while their mom was away.

“I was copying off them nas— humping on her leg, sucking on her titties, that type of s*t at 5 years old. B#$h R. Kelly’d me when I think about it. She was grown. They look like they were grown. Like 17-18,” he continued.

He refused to claim the incident as losing his virginity, but he knew that his first sexual encounter was inappropriate, especially for a 5 year old.

“I ain’t know what I was doing then. I knew more than the average 5-year-old,” Kirk said. 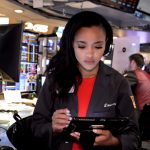