Khady Thiam Gueyer, sister of Aliaume Damala Badara Akon Thiam (popularly called Akon) has been revealed as the strong force behind his brother’s rise to fame on the international scene. While Khady might not be as popular as her brother, She has long held leadership roles for Akon’s $80 million brand.

According to blackbusiness.com, Khady has not only been pivotal for Akon’s brand but also that of other family members. Following her graduation from college, Khady was immediately snapped up into the family’s business scene. Her first role was with Akon, for whom she was executive assistant. She soon began to take up more responsibilities as she proved to be incredibly effective. Khady went on to become Akon Lighting Africa’s project manager and led the brand’s efforts to become a global force.

Khady plans to open more businesses moving ahead, and is unquestionably delighted about her contributions so far. “This superpower provides indisputable evidence not just of women’s talents and capability to lead but that my contribution is now widely recognised and welcomed in entertainment arenas and networks,” she said in an interview. 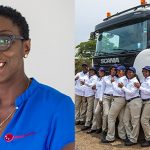