Genesis Hansen, a 21-year old Black student from Oregon State University, was brutally arrested by two white police officers for allegedly riding her bike on the wrong side of the road. She was also charged with resisting arrest after insisting on her right to refuse to provide identification.

On October 13, Hansen was reportedly stopped by Oregon State Police trooper Kelly Katsikis because she was riding her bike on the wrong side of the road. Things escalated quickly and several witnesses took videos of what has become a violent arrest.

Police finally released the 38-minute body camera footage a week after the incident. It showed Hansen being arrested on the ground after Katsikis claimed she was not cooperating. Hansen can also be heard asking the trooper why he demanded to see her identification.

At one point, another officer, Corvallis Police Officer Donald Sheldon, arrived and Katsikis said, “Every question that I ask, we go in a circular argument wherein they state, ‘I don’t answer questions.’ It’s a minor stop to start with, but that’s where we’re at.”

After a few minutes of discussion, Katsikis told Hansen, “I need you to either give me your identification now or you are going to be under arrest. Do you understand that?”

The officers then continued placing handcuffs around her wrists while they violently pinned her down to the ground.

The witnesses nearby tried to stop the officers. One woman can be heard saying, “She’s a young woman, you do not need to be on top of her. She is not resisting. You are so much bigger than her. This type of force is not necessary.”

Hansen was eventually escorted to the police car. She was arrested for interfering with an officer and resisting arrest. She was transported to the Benton County Jail before she was released.

The incident has since sparked outrage from advocates. The Alaska Oregon Washington State-Area Conference of the NAACP and the Corvallis-Albany chapter want all charges against Hansen to be dropped and for police to apologize, describing her arrest as “another example of excessive use of force imposed on communities of color.”

Meanwhile, the Oregon State Police said in a statement, “As an agency that is committed to eliminating racial profiling and implicit bias in policing, these allegations are being meticulously reviewed and we are compiling as much information as possible.”

“The agency understands the importance of vigorously investigating these allegations and is taking a serious look at the incident.” 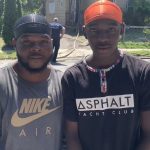