David and Aaron Cabella, 24-year-old twin brothers from Philadelphia, aimed to fill a void by creating a business that will help get other Black-owned businesses’ products to consumers. Black and Mobile and launched on August 1 through an app the pair developed.

David began learning entrepreneurship at a young age and taught himself how to design websites and apps. When he was 22, he began delivering services through apps he created and raised $1,100 in less than two days. That’s what sparked the creation of Black and Mobile.

“If you look at all the delivery services, you cannot go in there and easily find a Black-owned business,” David told The Philadelphia Tribune.

The Cabello brothers hope to also show young people in their community that there is a path to success.

“We are keeping young people off the streets; we are giving them jobs and we are becoming role models to them and we are showing them that we can do something positive. This city is full of brotherly love and there is no hate going on,” said David to the newspaper.

“What we are talking about is that God gave us the love, a bike, and a bag and an idea and said run with it and literally we haven’t stopped since,” he continued. “This is what gets me up in the morning. Without Black and Mobile, my life will be, like, miserable.”

For more information about Black and Mobile, visit their website here. 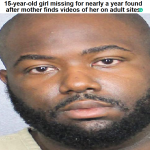