While four Phoenix police officers surrounded a car parked in the driveway of a house on Saturday, at least two of the officers had their guns drawn and pointed at the car.

“Hey, stop f—— moving. I will f—— shoot you,” one officer standing near the driver’s window yelled at the car’s lone occupant. Bystanders watching the tense scene unfold from across the street repeatedly shouted, “Don’t shoot him!”

Moments later, a cracking sound is heard, followed by a sharp exclamation. There was a brief silence. Then, deafening bangs — roughly 10 — rang out in quick succession.

Bystander video of the fatal shooting went viral over the weekend, prompting protesters to march for hours through the streets of Phoenix on Sunday night, disgusted by another deadly incident amid nationwide demonstrations against police brutality. The protesters called for the release of the officers’ body-cam footage, with at least one city council member also publicly criticizing the Phoenix Police Department’s handling of the incident, the Arizona Republic reported.

“It does not shock us that despite all the scrutiny from community Phoenix PD continues to respond violently to calls. But, we must all continue to ask for transparency and accountability,” Garcia, the council member, wrote in a Facebook post Sunday that included the video. “We cannot allow for dishonest narratives to be built by violent departments. We will continue to call for independent investigations into officer involved shootings.”

In a statement, the department said officers responded to a 911 call shortly before 1 p.m. Saturday from a caller who said a man recently tried to kill him and that the person had come back with a knife. The caller reported that the man was “threatening to harm him again,” according to police. 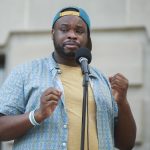 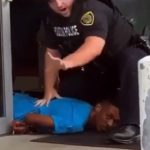