A Black player for Charles City High School heard “several bigoted comments yelled from the crowd” during a game played at Waverly-Shell Rock High on June 27, according to an online statement from the Charles City Community School district and information from the school district communications director.

The school district didn’t name the player. Jeremiah Chapman, who says he’s the only Black player on the Charles City High team, told CNN that fans yelled “You should have been George Floyd” and “Get back to the fields.”Chapman said he was even called “Colin” at one point, which he believes was a reference to Colin Kaepernick, the former NFL quarterback widely known for kneeling during the National Anthem in an effort to protest police brutality.

“I try my hardest to have everyone like me because that’s just my personality,” Chapman said. “And it’s just hard seeing that no matter how hard I try, people can’t accept me because of my skin color.” Chapman’s mother, Keisha Cunnings, told CNN she wasn’t at the game but was flooded with mixed emotions when her son called to tell her what happened.

“I was angry because as a parent, this is the one fear I have for him,” she said. “The other part of me was kind of relieved that it did happen because it opened Jeremiah’s eyes to not be so naive and colorblind and ignorant to the fact that things like this still happen.”

“I feel like they were being kids and just trying to say whatever they could say to throw him (Jeremiah) off his game and unfortunately they took it to race,” she said. It’s not clear who made the comments.Both the Charles City and Waverly-Shell Rock school districts called the comments from the stands unacceptable. Other players of color have come forward in the past with similar stories of racial comments and actions while playing road games, Charles City Community School District Superintendent Mike Fisher told CNN. 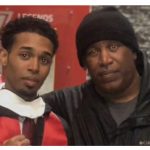