The wife of a man shot and killed by Atlanta police outside a Wendy’s said she and her husband prayed over police brutality against black men — but never thought it would happen to them.

In an interview with ABC News, Tomika Miller said her husband, 27-year-old Rayshard Brooks, was a family man who was devoted to his three young daughters and stepson.

Brooks was shot to death by an Atlanta police officer Friday night after he fell asleep in a drive-thru line at Wendy’s. After initially having a cordial exchange with police, Brooks appeared to panic as he was being arrested, grabbed an officer’s Taser and ran. Police said Brooks was shot after he pointed the Taser back at the officers.

Before he was shot, he asked officers if they could just let him go home to his family.

“I wish he could have made it. I wish they could have had sympathy or compassion, ‘Miller said. “I just feel like they didn’t have to be so aggressive.”

Miller said she’s devastated about all of the things that her children will miss doing with their father. The couple had recently celebrated their daughter’s 8th birthday, and Miller said Brooks had promised to take her skating and to swimming lessons.

Miller said she is doubtful now that police violence against black men will never stop. She said that one of the most heartbreaking things about losing her husband is that now, she feels like a statistic.

“I feel like I’m stuck being a single black parent. I’m being forced to do it by myself. This was not a choice. They took my husband away,” Miller said. “They destroyed my family. No justice will ever get that back. This is another black family being broken.”

Violent protests broke out in Atlanta the night after Brooks was killed. Protesters torched the Wendy’s where he died and destroyed nearby buildings.

Miller said that she understands protesters frustration and anger, but she’s urging people to fight with peace and dignity.

“I don’t know how many times it can be said that damaging things and destroying property is not going to solve the problem,” Miller said. “It only makes more aggression, more conflict, more issues, more stereotypes.” 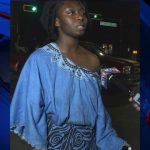 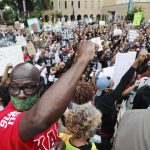