He went from slanging crack to baking delicious cupcakes from his own bakery.

Meet Antwon Gutierrez, better known as Chef Fresh. At 16-years-old from Peekskill, NY, he began selling drugs, but he turned things around and these days, he owns Fresh Taste, an online bakery that caters to celebrity customers.

Amazing yes, but it was no walk in a park. He’s been to prison three times, including twice for dealing drugs and another for robbery that put him behind bars for 32 months.

“If I could tell teenage me that I’d be baking the dopest cupcakes, I would’ve said you’re crazy, ” Gutierrez, 33, tells The Post. “But I still have that hustler spirit.”

Gutierrez joined the Doe Fund, a nonprofit that aims to break the cycle of homelessness and criminal recidivism, fresh out of prison in 2011. Initially, he went in with ambitions to earn his commercial driver’s license. Instead, he took interest into the food service industry. The food-services head mentored him and taught him how to bake.

“He didn’t just give me a recipe,” Gutierrez says. “He showed me how to make it, and it was similar to what I was doing when cooking crack. It was all about mixing things and the different reactions you get with chemistry. Something just clicked.”

He began to bake and cook in the organization’s kitchen. Eventually he worked at hotels and restaurants and baking on the side even posting his creations on social media.

“I would take pictures and post them on Insta, and people were asking where they could buy [them],” he says. “I knew there was a demand.” He sharpened his business skills by participating in Defy Ventures‘ CEO of Your New Life program, which is similar to “Shark Tank.”

Gutierrez went on to start Fresh Taste Bakery in 2016 and now sells about 500 treats a day.

He’s made cupcakes for DJ Khaled, “America’s Next Top Model” winner Eva Marcille and the cast of “The Real Housewives of New Jersey.” But he’d love to bake for President Trump.

“I could learn a lot from him being his baker,” he says.

We are very proud of his success and hearing stories like this is amazing. You can do it. You can do what ever you put your mind to. 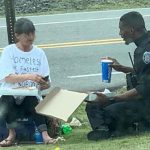