Michael Vick is arguably one of the most talented former NFL players know fro his speed and innovative style of play. Vick came to Philadelphia on a second chance after pleading guilty in 2007 for his role in a dogfighting ring. He served almost two years in prison.

Michael Vick is set to the an honorary captain during the Pro Bowl on January 26, 2020.

A Change.org petition is calling on the NFL to take back the honor. Surprisingly, Over 550,000 people signed the petition.

The petition cited the cruel and inhumane killing of dogs that led to Vick’s conviction.

Commissioner Goodell told the media that he doesn’t anticipate any changes with Vick.

“Over the last, what is it, nine years or so, we have supported Michael in his, what I think his recognition of the mistake he made,” said Goodell. “He’s paid a heavy price for that. He’s been accountable for it. He’s worked aggressively with the Humane Society and other institutions to deal with animal rights and to make sure people don’t make the same mistake he made, and I admire that.”

Goodell went on to say that some people will never forgive him.

“I know that there are people out there that will never forgive him. He knows that. But I think this is a young man that has really taken his life in a positive direction and we support that. So I don’t anticipate any change,” Goodell said. 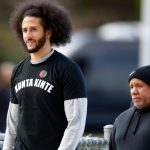